Isaac Souaci shared so of the techniques he learned during the production of this beautiful space interior.

Isaac Souaci shared so of the techniques he learned during the production of this beautiful space interior. It was all modeled with Blender and rendered in UE4. 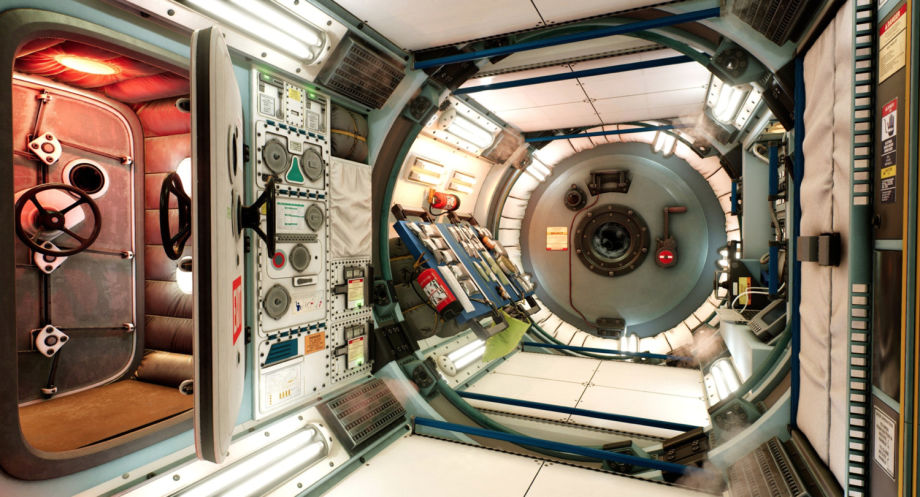 My name is Isaac Souaci, I’m a 19 years old 3D Environment/Prop artist from Algeria and I’m a self-taught artist.

I have started 3D modeling in 2014. I was inspired by watching and playing video games and with that in mind I dived into searching how they were created, this was the beginning of my journey. Soon I realized I have to learn a modeling software. I ask a friend and he mentioned Blender, due to its free nature and easy access it was a stepping stone to the beginning of my journey. 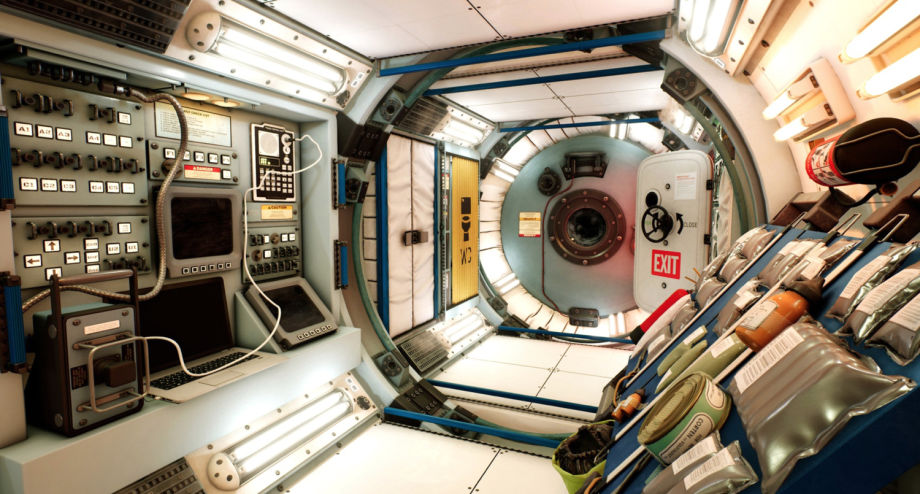 The first two years I was slowly developing my skills and completing simple artworks, honing my ability while doing freelance work, after some time I felt ready to try and push my ability and set out to start working in the game industry. I started working as a 3D artist at Pixel Perfect Polygons on the game “OUR GHOST OF WAR”, 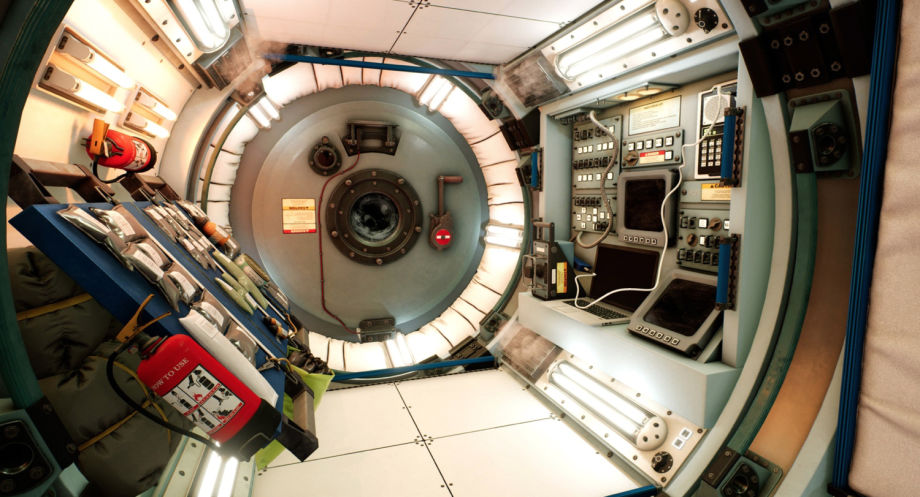 Being a part of a team, I faced the challenges that forced me to learn techniques and programs I had not previously encountered, such as Substance Painter and Substance Designer. I was lucky as one of my first assets was featured on Blender Guru’s Facebook page, this had really motivated me to learn more about the industry as a whole, it opened a door for me to a culture of game development where I met professionals and enthusiasts, making me eager for my next projects.

I set out to learn as many applications that could be applied to the creation process like World Machine and Speed Tree. I didn’t use them in any of my projects yet, but I was sure to have a practical understanding of them.

In the January of 2017 after a long collaboration with Pixel Perfect Polygons, they gave me a chance to work as a lead environment artist on their new highly anticipated game “Moonscape”. This was an opportunity to showcase my techniques, level of skills and the wide array of programs I got myself familiar with. The project had positive reviews and it was a thrilling experience to be a part of especially with it being a testing ground for next-generation technology’s to be used within my profession. 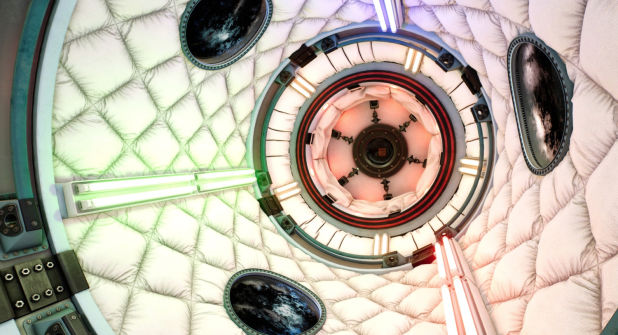 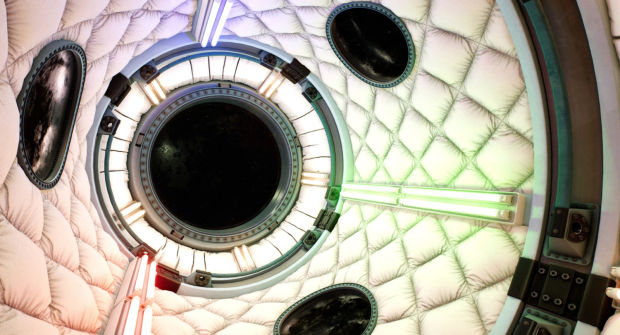 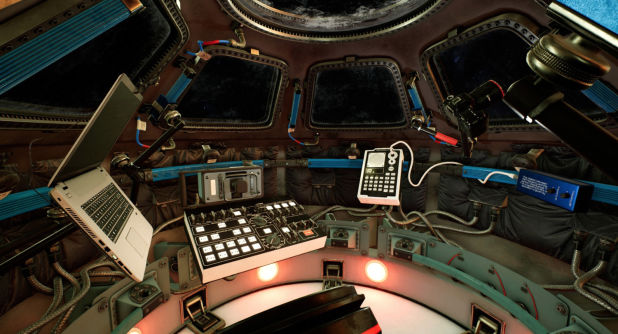 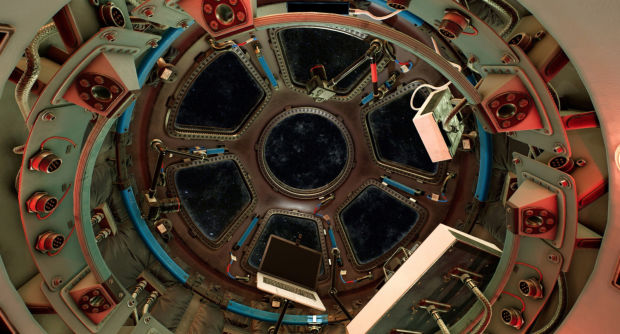 First, I had decided to make a space station with different cabins and I started with the above part which is based on a real NASA’s space station references. This part was full of details as someone can imagine from the reference I went with. I chose to make the props more detailed and for the sake of efficiency I restrained from adding everything but ended up adding the most interesting parts visually and the ones that made sense to the viewer.

Then I moved to the bottom cabin and decided it should be just an empty space, something like an architectural quirk and added a three bull’s-eye windows covering all sides along the cabin and a main window larger than the rest in the other end of the cabin,  on the rounded shape circulating the cabin I made a fabric Upholstery, giving it a relaxing feeling and comfort I wanted to be a thought of as resting or meditation area. I also added colorful fluorescent lights to give a neat lighting from within and to create an impression of complexity (to show the craftsmanship of every part).

For the main cabin (the body), I was thinking practicality and living conditions. So I covered all surfaces with metallic sheets then added sharp single-color fluorescent lights on the four edges of the cabin. I added the long air slots giving it a solid framework for me to start adding the rest of the gadgets all Astronauts need in the space station, from panels of commands and communications, packaged food to safety equipment, beds and bathrooms. Lastly, I added some wiring and nails as details to enhance the feeling of everything being held together in place. By the end of the main cabin, I added a massive round door. It served the function of being a portal to the other cabins and was covered with fabric upholstery and single bulls-eye window in the middle.

Finally, I added an exit door to an airlock room for the possibility of going outside the space station without exposing it to the outer space. 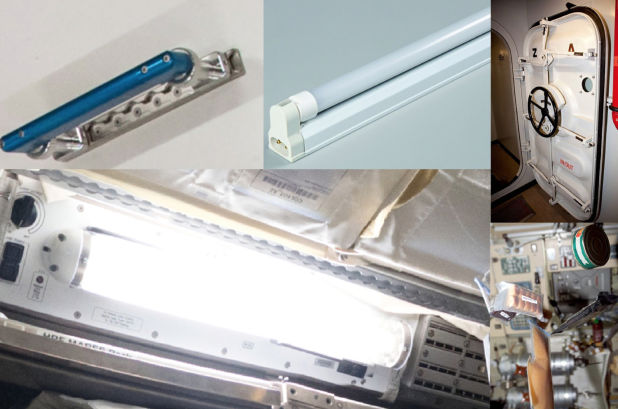 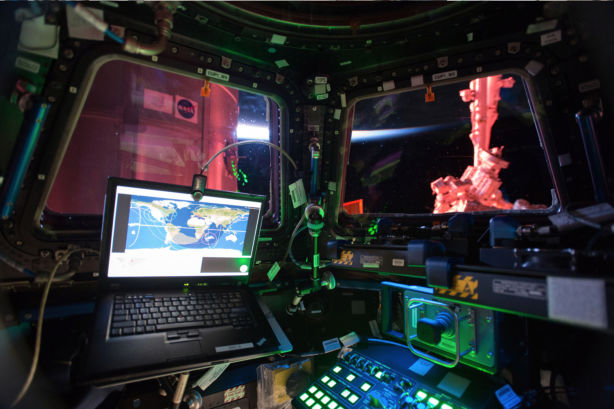 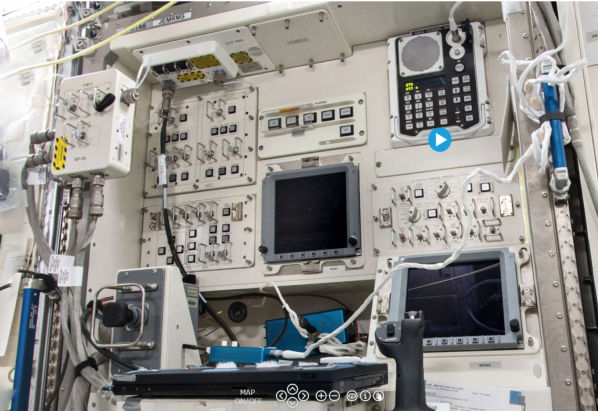 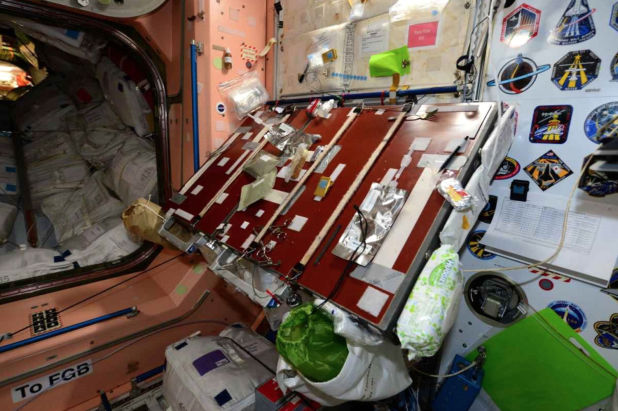 If was a challenging task to model every asset in Blender, but I had all the tools within the program especially for modeling and optimization and scene management. I also used a couple of other programs but the focus of it all was Blender. It was enough for me to work around that and complete the project to my content of doing a good job I am proud of. 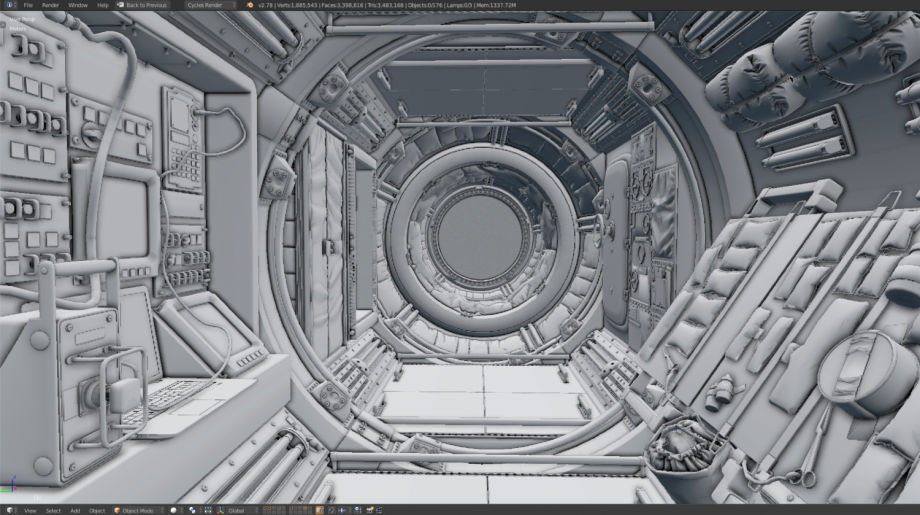 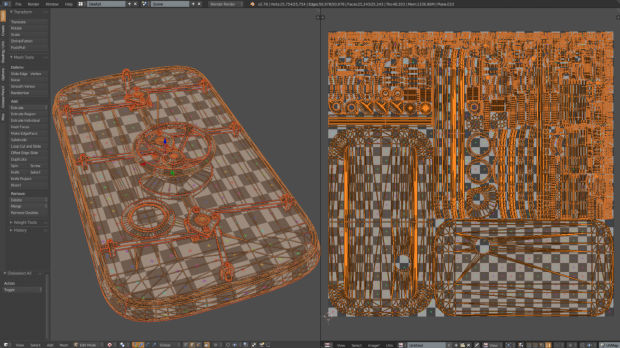 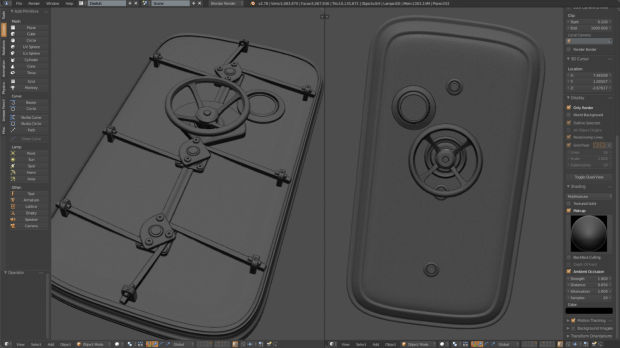 I decided that what I wanted to use a cloth as a basis of some of the materials (that were used in space suits for example). First I made a low-poly block, after some eyeballing with other components I jumped to Marvelous Designer. For the rest of the cloth I had exported their low-poly to Marvelous Designer and used that as an avatar. Marvelous Designer had really upped my skill game to get nice and realistic cloth models with neat folds, sinks, and bumps. 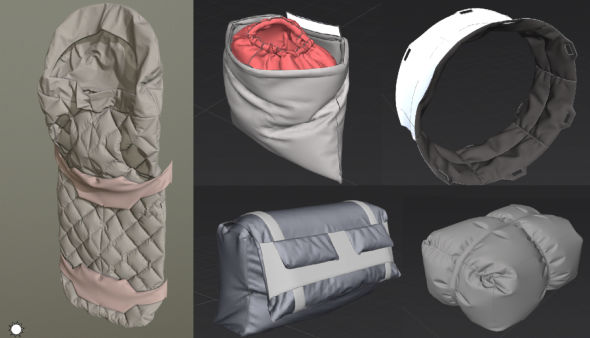 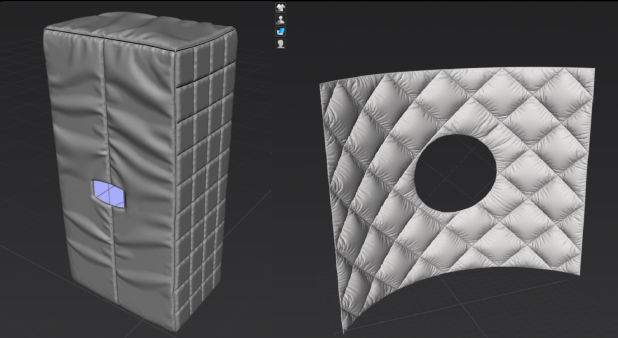 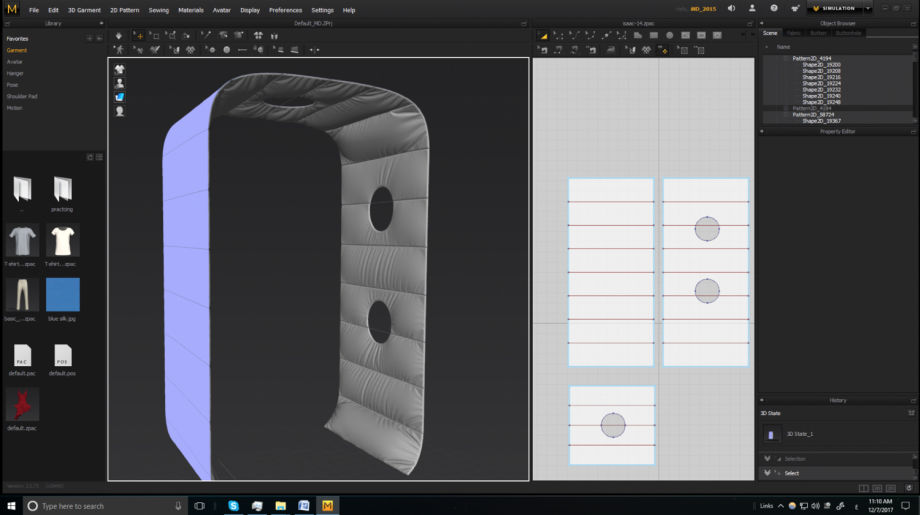 For making those props I made the high-poly in Blender then made a low-poly by duplicating the high-poly and decimating it as much as possible and using retopology for some complex pieces, finishing with the triangulate tool.

After that I made the UV map in Blender then exported it to Headus UVLayout to find and fix all errors and pack the islands to not leave any empty space between them.

After doing this, I went back to Blender with an optimized UV map. I prepared the prop for baking by creating materials to the high-poly mesh for the ID map baking and cut down the low-poly and high-poly mesh too many parts and name them for example (prop_ 01_high) and name its low-poly counterpart as (prop_01_low), so each part will be baked by its own counterpart name. I used this method to avoid baked Normal maps intersecting with each other.

After exporting a perfectly baked asset to Substance Painter I textured it and exported it to UE4 with three textures, the base with alpha channel for transparency, Normal map and RGB channel packed texture which has Green channel for Roughness. Blue Channel for Metalness, Red channel for Ambient Occlusion and alpha channel for Emissive. 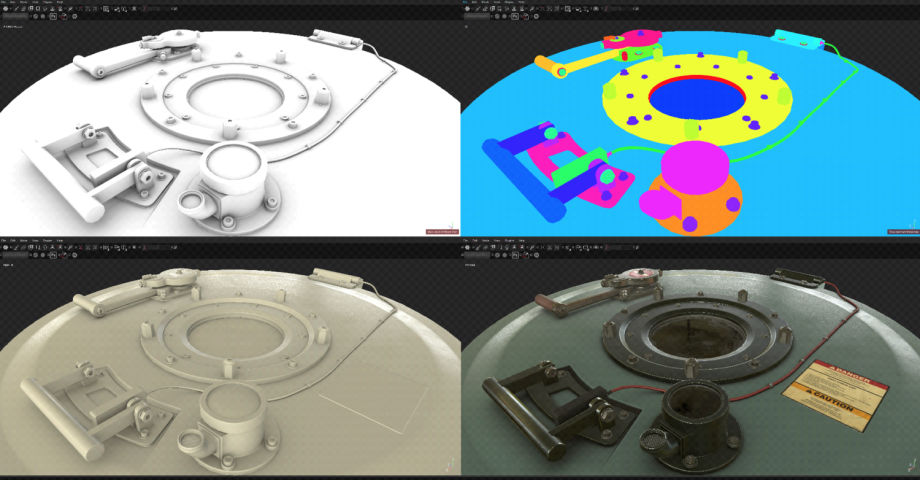 After I finished modeling and optimizing the scene in Blender and cutting down the whole scene to modular props, there were more than 50 assets. The rest of the work was baking and texturing with Substance Painter. When I exported the assets to Unreal Engine 4, each asset had a second optimized UV-map channel for lightmap.

After putting all the assets and modular parts in the UE4 scene and adding textures (and doing some editing on the materials) I cleaned up the scene by deleting some assets which didn’t fit naturally in the scene.

As a finishing touch I added steam for the vents which are behind the light bars and gave it a slow motion to emphasize that feeling that you are in space. 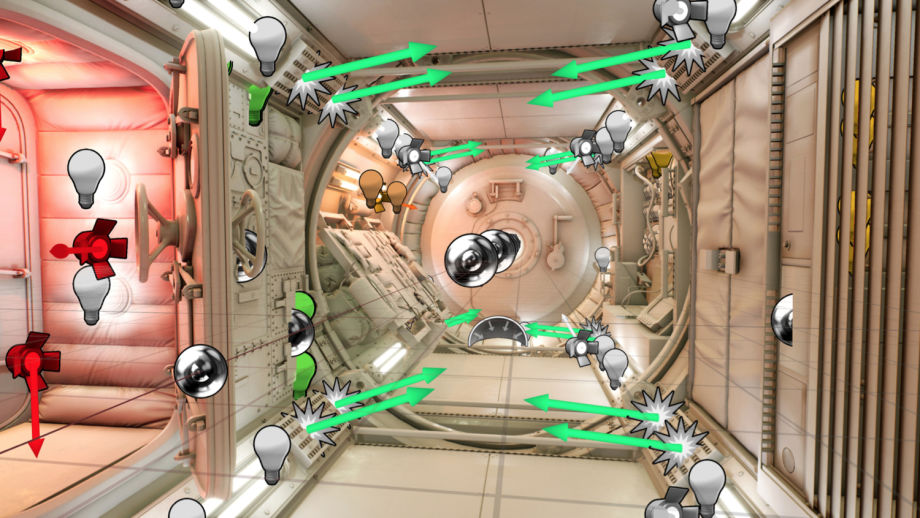 For the lighting, I used a white color as a basis, and then thrown in a little bit of warmer lights and a bluish skylight for contrast. The same thing with the circle behind the portal: added a bunch of warm lights to get a nice mix of colors. I used very hot lights above the food table, I think that’s the kind of lighting which should be suited for eating places and spiced it up with the small green and orange accents. I used the Emissive material for buttons and bar lights to get realistic bloom effect with post process.

For the exit door (airlock room), I used a big red light in upper part mixed with white lights in the side and that gives an alarming feeling when you are opening the door and a beautiful variety in the scene.

For the bottom Cabin, first I went for a neutral lighting, like in a clay render. I made the lights along the circle and added red circular lamps along the circle piece which were matched between the cabins. After that I created the big three light bars between the windows in the side and gave them the basic three colors (R.G.B). I aimed to get an artistic look with this lighting setup. 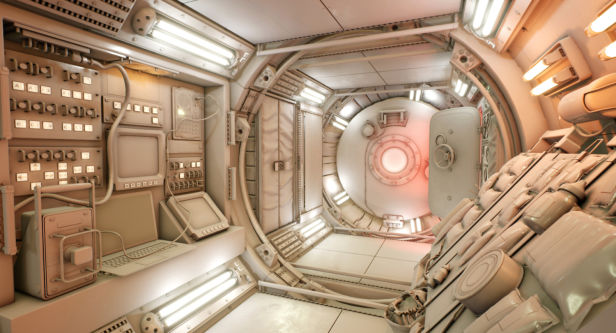 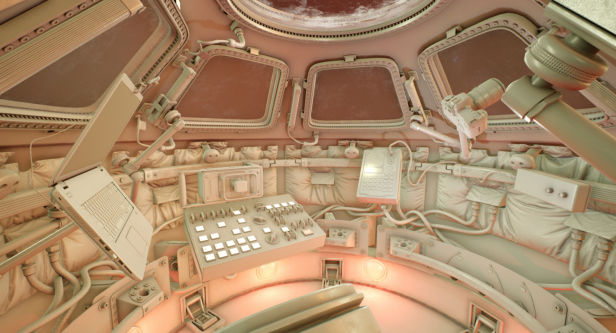 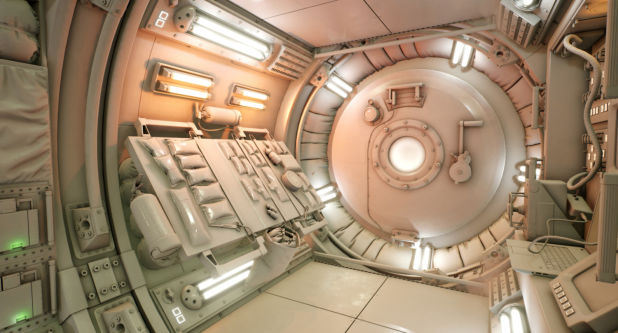 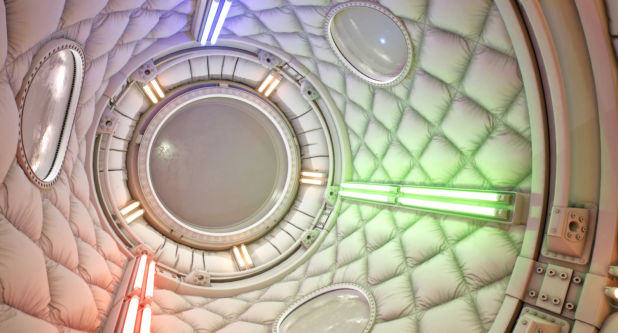 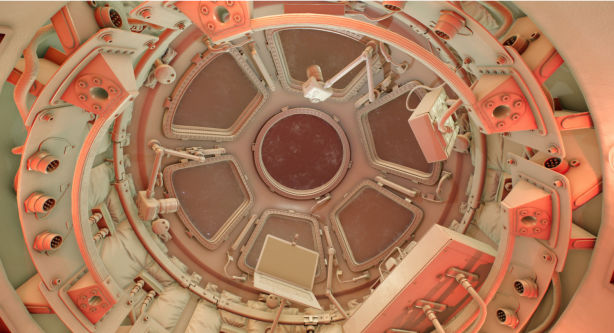 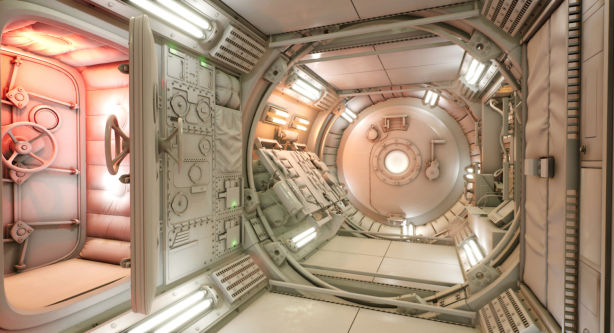