Jodie Lee Durkin and Kevin Ua-wanapaksa talked about the creation of their awesome 3d environment scene, they’ve created with UE4.

Meet Jodie Lee Durkin and Kevin Ua-wanapaksa – the students from the University of Hertfordshire, who gave a detailed breakdown of their amazing personal project. It features amazing stylized visuals, beautiful fluid animation, and gorgeous sceneries.

J: I’m Jodie, I also studied Games Art at University of Hertfordshire and I aim to become a Character Artist.

The start of WhiteWater began with being tasked to create a cinematic flythrough lasting around a minute. With just two members of the team, we kept a strict limit on the scope of the project and planned around our artistic strengths. We dropped the possibility for a playable demo due to the lack of technical skills within the team. We also wanted to cater the project around what we wanted to achieve in the final year of our university degree. We both agreed to work on a small, manageable yet intriguing world which we called WhiteWater, focusing on the art direction and world building aspects. 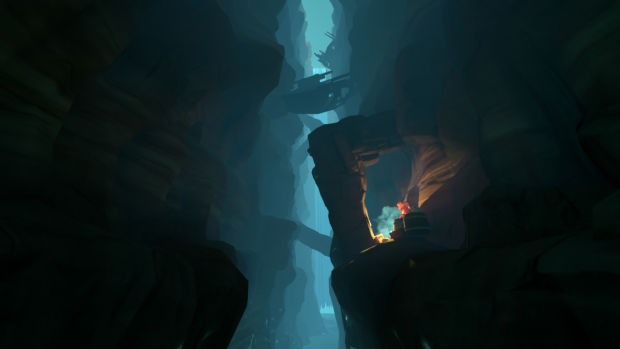 K: The creation of each environment started with inspiration for the composition of the scene. Next came a block out of the environment in 3D, which I would take a screen shot of and produce a quick paint over to develop the look and feel. It was important that each environment had a distinct tone and mood yet were connected through the river. Each shot has a focal point relating to the stream of water to solidify the theme of the world. There was a lot of reiteration with each scene to ensure the tone of the project was consistent. 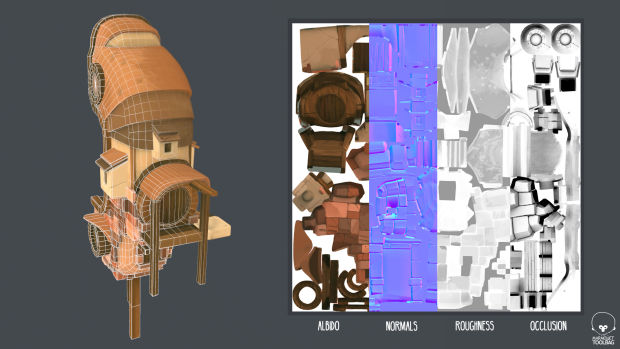 K: Originally, all of the environments were linked together and the camera moved up the stream and through the whole project in one continuous shot. However, there were a lot of moments in the shot where the composition of the environment couldn’t be controlled and they weren’t up to the standard of the rest of the project. The transitions between the main elements of the scenes were also very sparse and we didn’t have the man power to bring them up to the level of the rest of the project. So I decided to change the camera to spend a small amount of time in each environment before cutting to the next one. Cutting out the transitions between environments meant I could focus entirely on the composition of the shot without worrying about less important aspects. 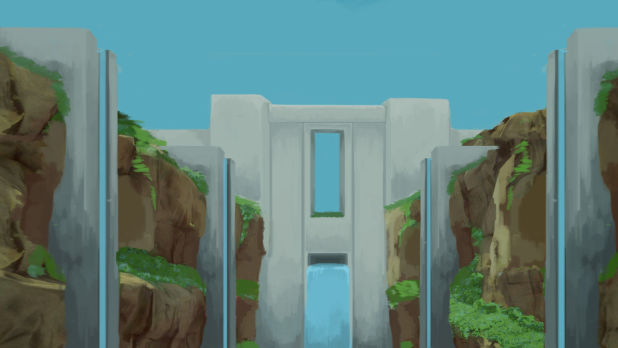 K: There was another benefit that came with the change of camera behavior, which was implied distance. I wanted the switch between environments to be fairly drastic by contrasting the environments quickly, this was in hope that the audience would feel that to get from one scene to the other, the distance traveled would be quite far and that they would imagine the missing transitional elements themselves. The change of environments is shown in the content, from viewing rocky terrain to being surrounded by vegetation, which is then supported by a change in the colour and mood, giving each environment its distinct tone and personality. 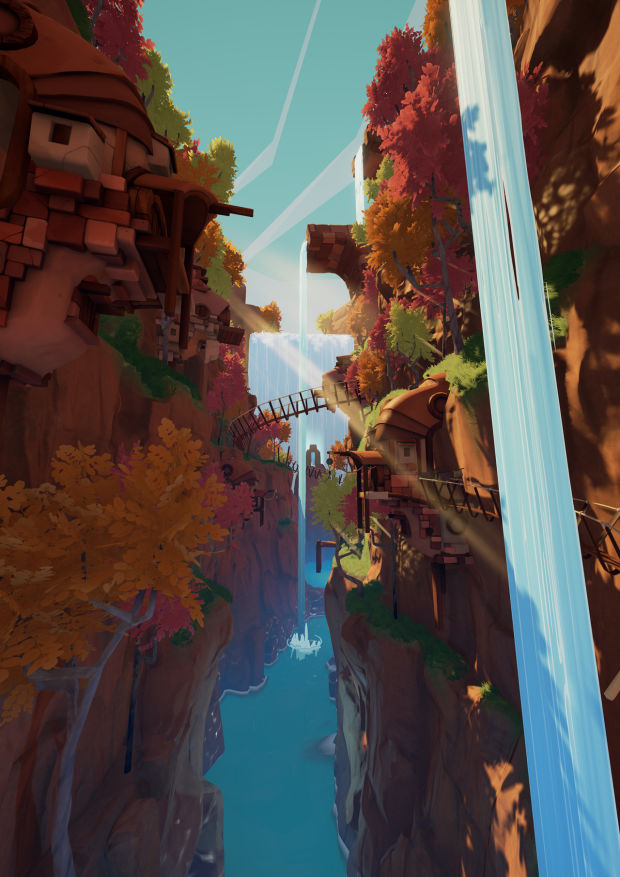 K: The consistency of the camera was important, always looking up and moving forward. The angle of the camera facing upwards helped to sell the verticality of the environments. Because the audience is always looking up, everything feels bigger and taller. The forward momentum helps to sell the idea of crossing distance, continuing the idea of the journey upstream as well as further selling the idea of passing distance between shots. Having a consistent vertical design in each shot has similar affects as the river, connecting each environment together and making them all feel like they belong in the same world. The composition consistency also makes the editing cuts a lot smoother. 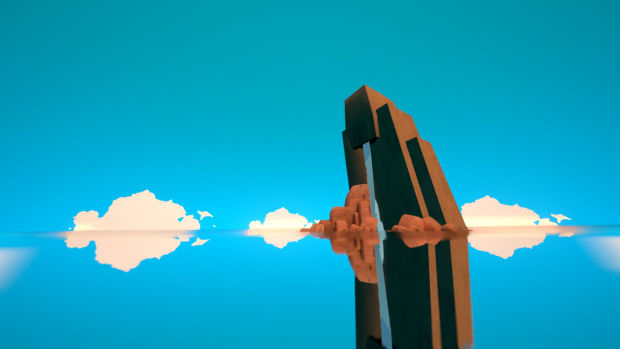 Large Mountain Looming in the Distance

I used Autodesk Maya to create the base mesh, which would be used in the block out stage so the composition of the scene could be quickly ironed out. Then I would use Zbrush to add any details that I wanted, which looking back aren’t that noticeable. I would also roughly polypaint the model in Zbrush, separating each material into a different colour which allowed me to accurately add in more texture detail in Adobe Photoshop. Then I would bake a base colour map and a normal map using xNormal and assemble the scene in Unreal Engine 4. 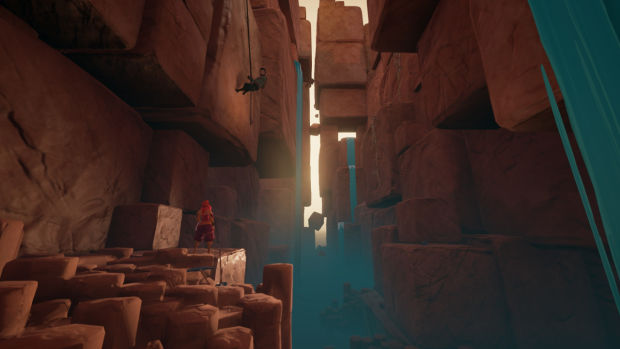 K: From the start, Jodie and I knew that we wanted to create a stylised world which was welcoming and peaceful. I created the environments with this in mind, there are no hard edges or sharp shapes in any of the assets, everything is very soft. I kept this as a rule with the other aspects of the environment such as choice of material and colour to keep the style consistent. It was important to keep the world as natural as possible, so there is very little metal or plastic materials in any of the assets and the colours are also very organic, with variations added to keep the world vibrant and interesting.

K: Lighting the project was tricky as all of the light sources had to seem natural. A lot of the initial lighting was quite bland, but I played a lot with the directional light to get an impactful mood and tone of the scene. I worked hard to get interesting highlights and shadows from the directional to really increase the impact of the composition of the shot. Focusing light where I wanted the focal point to be was important, as well as adding intense spotlights to get the rim light on the characters and assets.

J: As we decided to cater the project around our skills and wants, we decided that I would create characters to populate the world and add movement to the shots. The aim of the character was to add story to the trailer and give an impression of a journey up the river. 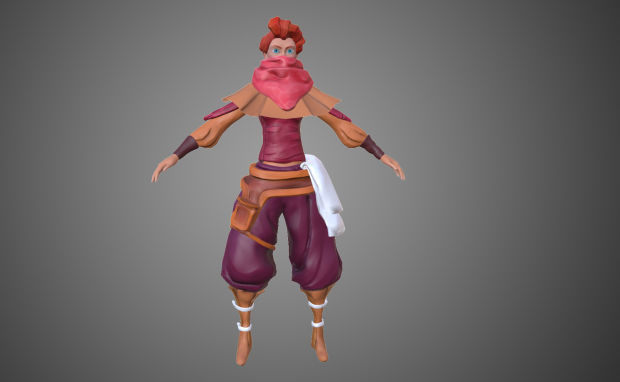 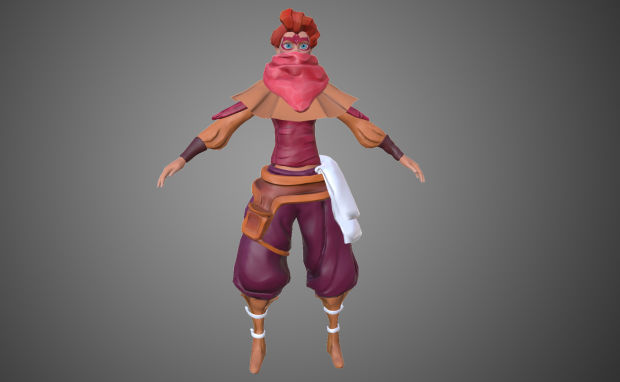 The style of the character was challenging. All of my previous work had focused on realism, and artistic style wasn’t something I had an instinct for. To begin with, we didn’t know what we wanted. We experimented with non-human creatures and masked characters, though none were ever strong enough for us to decide upon. Once we started to focus on world building and the story of the game, human characters became the unspoken decision.

J: The world, story and non-existent gameplay had a large impact on the design of the character. We knew that the gameplay, if we were going to include it would have been puzzle solving. With this in mind, we knew the primary character was going to be a practical person who fixed things. Kevin created loose concepts, mainly focusing on the silhouette which I then took over, carrying on the designing process within Zbrush. The progress within 3D was largely developing the form of the character to match the environment. It was particularly challenging to manage the balance of detail which added character and keeping it simple so that it matched the minimal detail style of the world. The character was also a journey from realism to stylisation for me. The face of the character acts as an example of this, as I began the sculpt as a realistic study, which became stylised with each iteration. 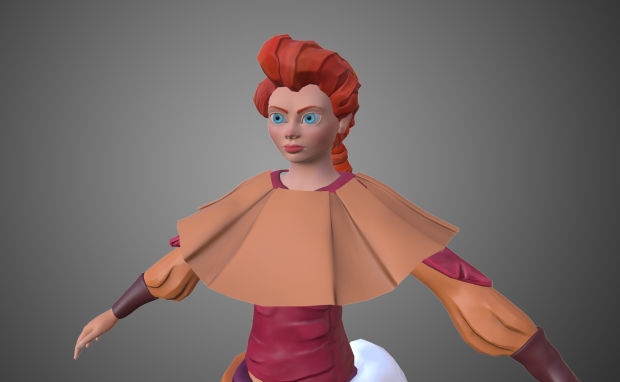 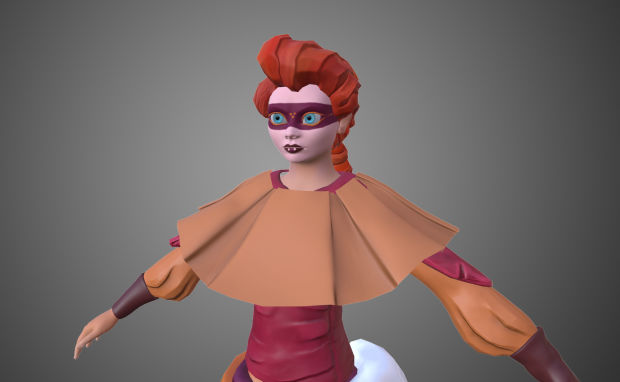 The style of the model solidified once I had defined the style of the hair. Originally, it had been smoother with a high amount of detail sculpted in. Once I had simplified the shapes and sharpened the angles of the hair, the rest of the character followed. The folding and detail of the clothing became a lot cleaner and the overall shape of the character tightened up.

Once I began on the second character, the process was a lot faster and cleaner as I had defined the style and shape of what I wanted. Due to the amount of experimentation and development the primary character had taken, I was also pressed for time to create him, which resulted in a much simpler form and details which I think turned out well. Once I had the base of the character, it was a matter of how to add detail to make the personality of the character to come through. I added wear and tear to the clothing to achieve a ragged looking character.

J: At the begging of the project, we didn’t originally include any animation. This was due to reliance of freelancers from the animation course at university to rig and animate, and with animators having their own projects we decided that animation was a bonus if we could include it. We managed to recruit Emma Porter from the animation course at Hertfordshire to rig and animate a walk cycle for the primary character. I rigged and animated the secondary male character, along with idle animations for the girl and adding a jog into the walk cycle for more variation and fluidity in one of the shots.

The main aim for the project was to keep it simple. We didn’t want an overabundance of movement to clash with the simple camera pan we had decided upon. The purpose of the animation was to embellish the scenes, not distract. Because of this we chose understated, realistic movement over any exaggerated gestures. This decision was also to work around my lack of experience with animation and the time restraints we were experiencing.

K: The effects were mainly created in Adobe Photoshop before being imported into Unreal Engine 4 as either a sprite or a texture. It was really important that the particle felt stylised and drawing it in Photoshop allowed me to get a lot more control over the style that I wanted. 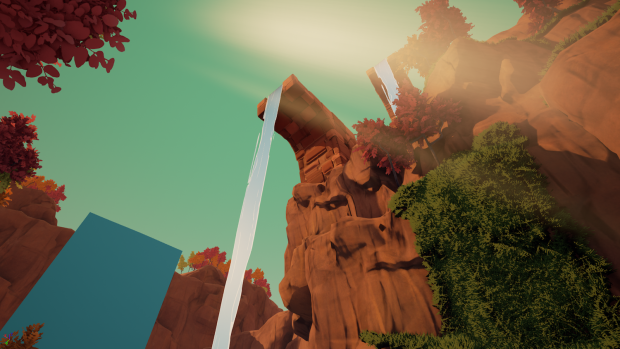 Including the effects helped to bring the world to life. Without the effects the environment was static, but just small movements with the grass swaying in the wind and other small things that the audience would only subconsciously notice really helped to sell the world. The reflections in the water and the white dobs make the scene very clean and peaceful, which was the world that we originally wanted to create. Adding small touches such as these emphasised the tone and mood of the scenes.

We want to say thank you to our friends, families, and the lecturers who were always there to support us and give feedback to help us improve our work. We would also like to thank you for the interview. 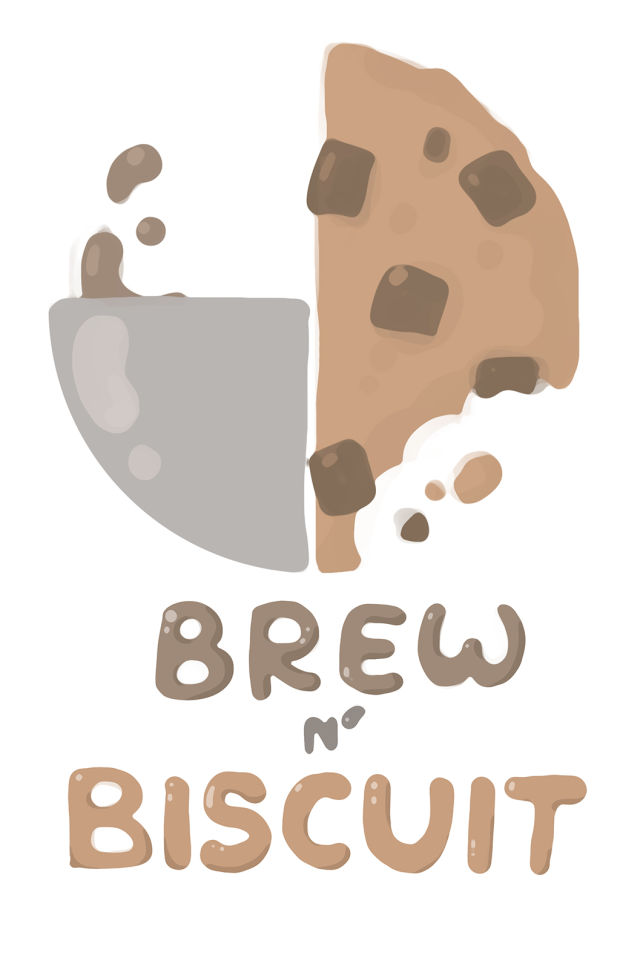